Guaranteeing an uninterrupted product flow from one level to another, this heavy duty, well-designed vertical conveyor is known for it’s reliability, low maintenance and longevity. A patented cam follower system in this elevator features shock free movement in which products are kept horizontal. Also available in stainless steel for food grade or washdown environments.

Continuous product flow with no start or stop movement

Product transported smoothly and safely with carriers remaining horizontal at all times. 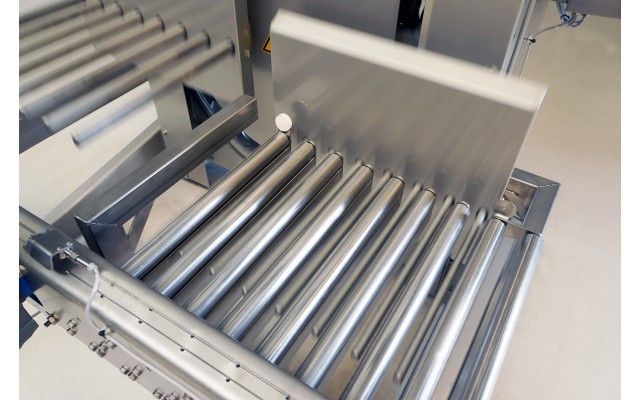 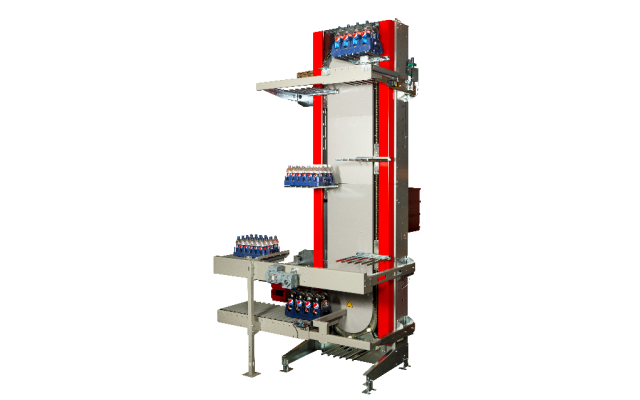 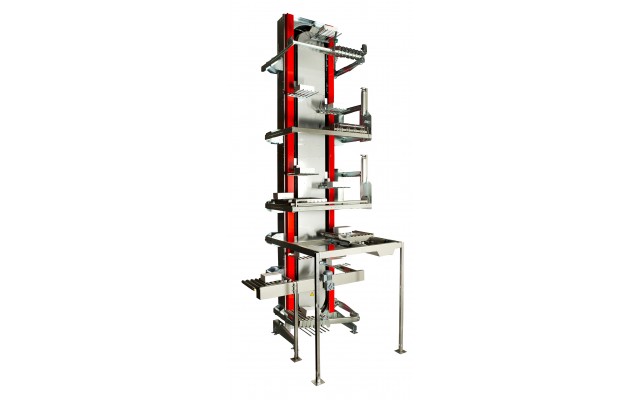 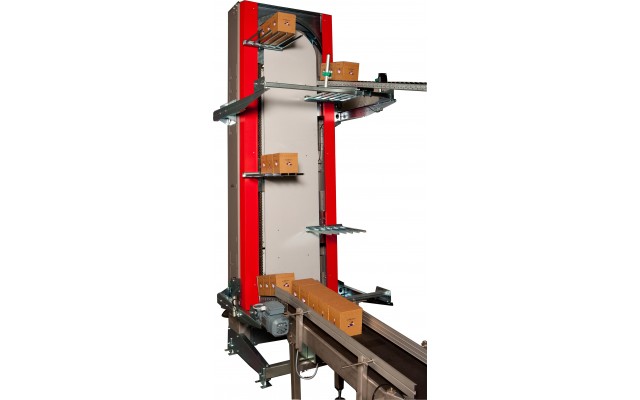 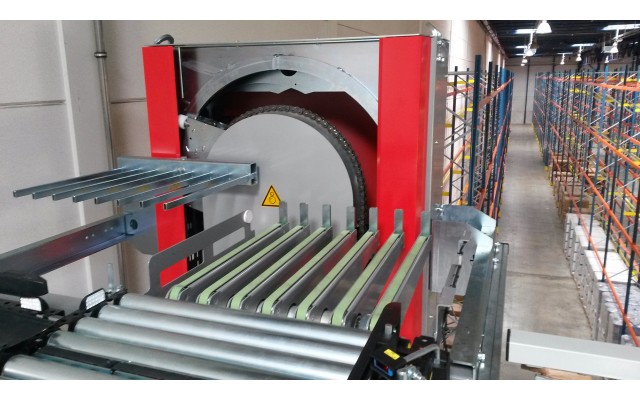 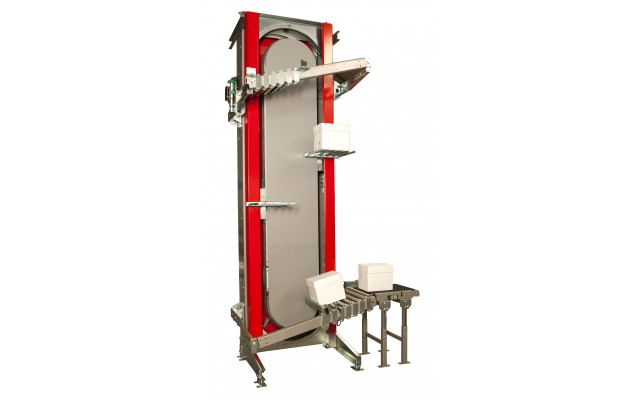 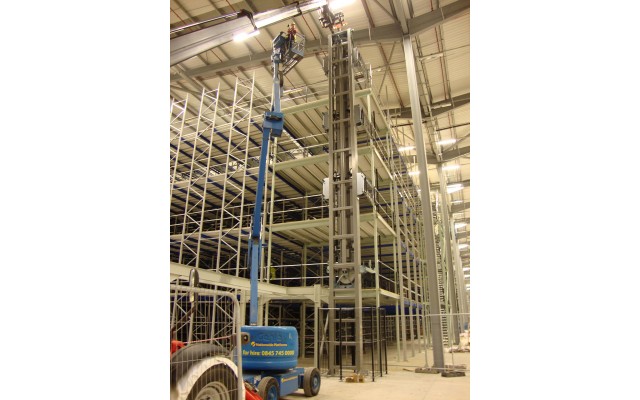 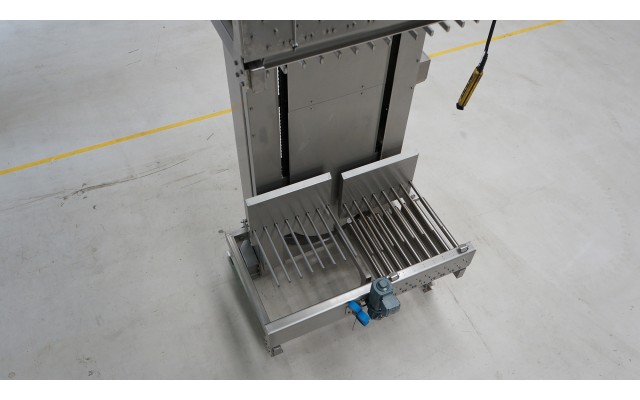 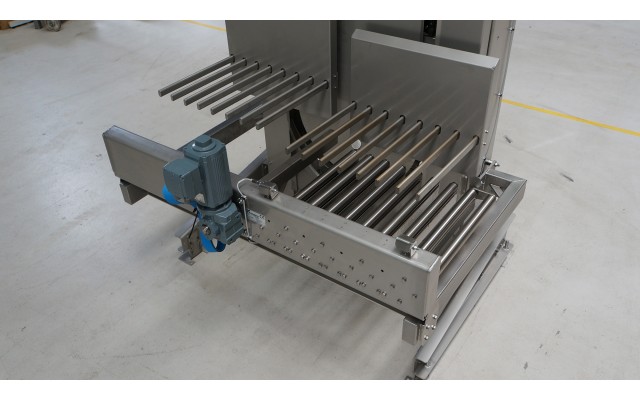 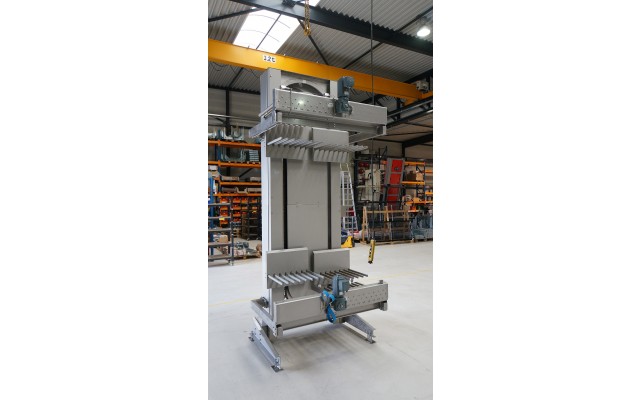 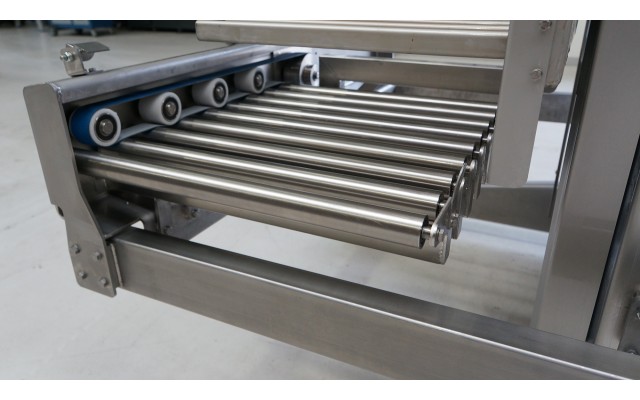 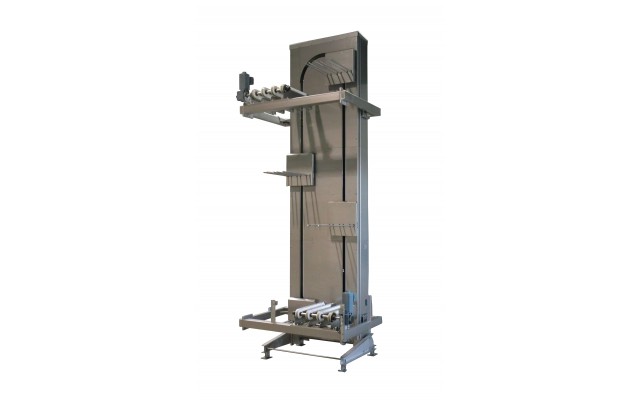 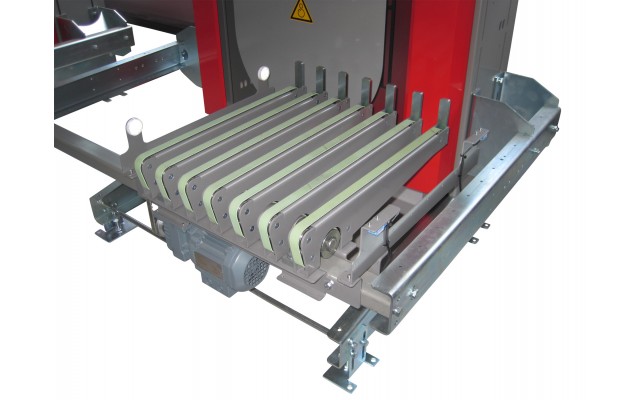 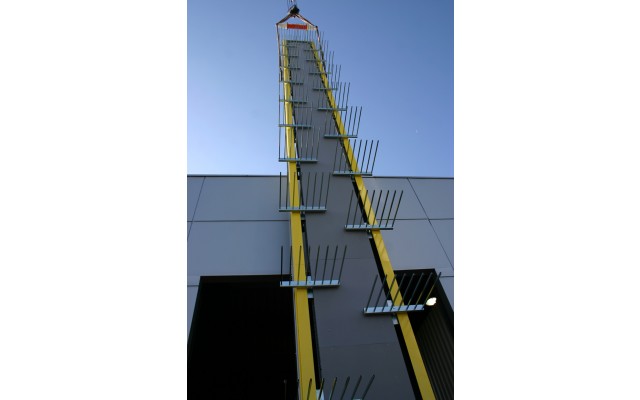 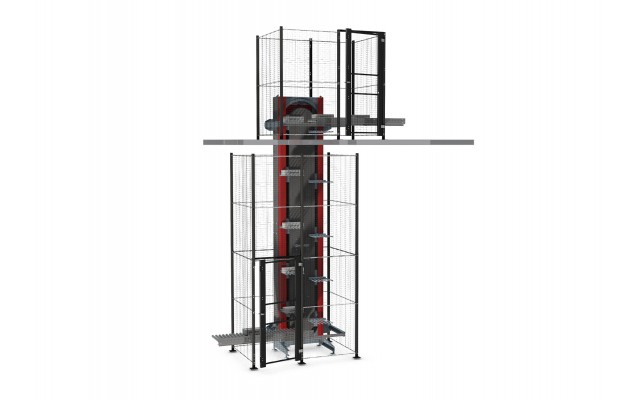 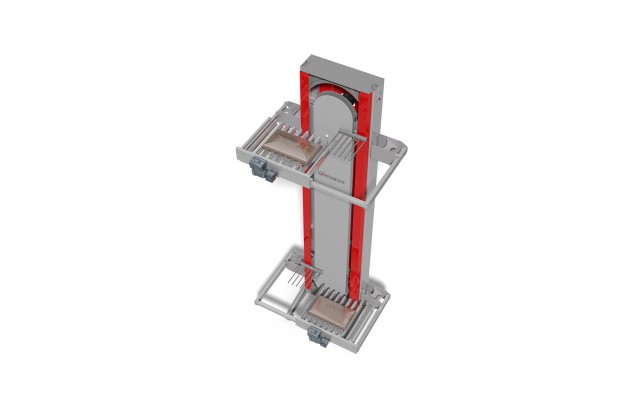 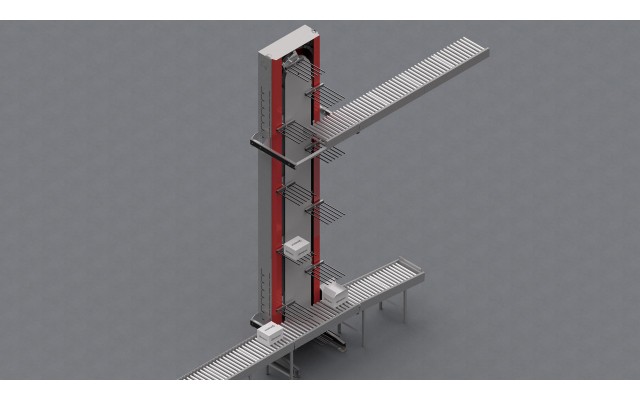 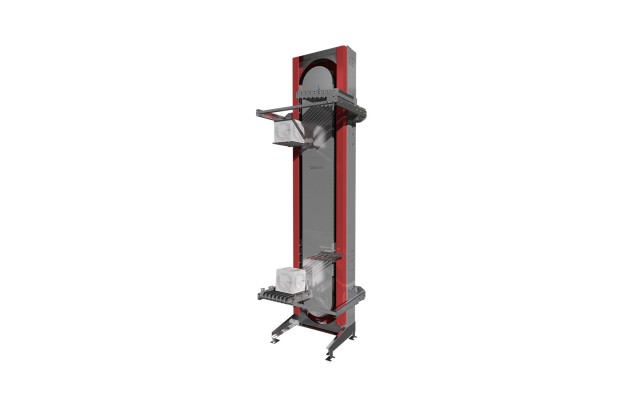 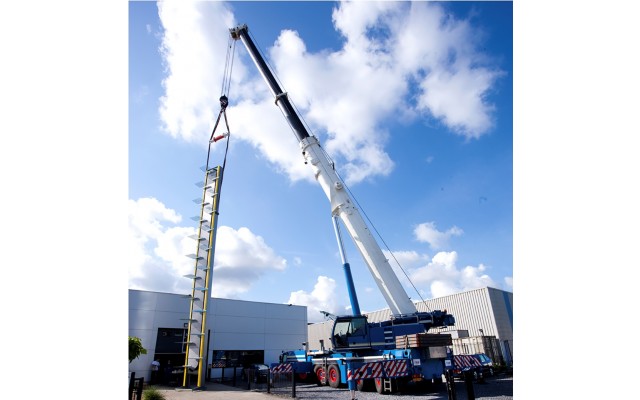 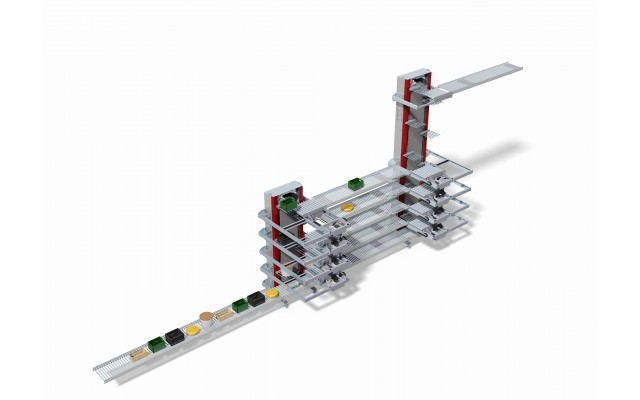 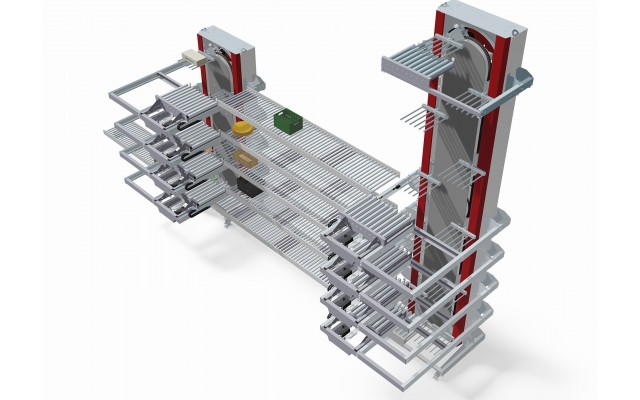 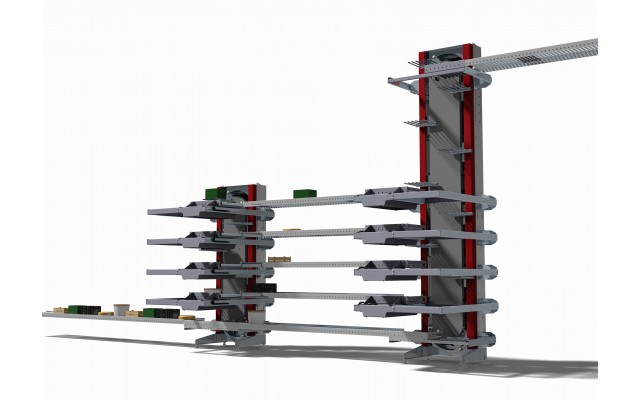 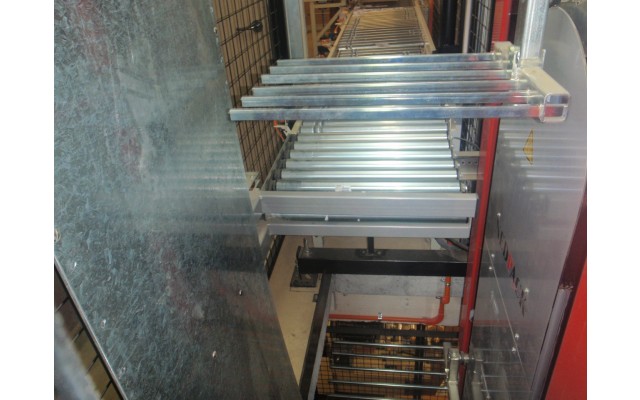 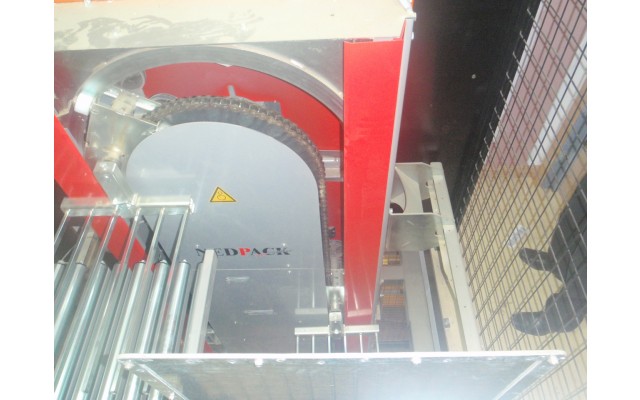 • Continuous product flow with no start or stop movement
• Increase capacity with option for extra product carriers
• Possibility to have infeed and outfeed on more than two levels
• Drive system is closed column
• Easy access to product carrier
• C-lift or Z-lift line up possible
• Suitable for vertical sorting over several levels
• Product transported smoothly and safely with carriers remaining horizontal at all times
• Low operational noise
• Robust, solid construction with very low maintenance
• Can handle boxes, crates and sacks up to 50kg and 2000 products per hour
• Integrates into your conveyor system for a complete vertical conveying solution

Space is sparse and expensive. If possible, every square meter in a production area or warehouse should be used as efficiently as possible. This also means that products are increasingly in need of vertical space.

Given the layout of production processes, vertical transport is often necessary in a production line. One reason may be that products for the next machine in the line needs to be supplied at a different height. Sometimes it is simply desirable to free up the floor, for example to give people or trucks access or to make room for other machines. This will almost always involve a steady stream of mostly identical products that need to be transported no more than a few meters up or down.

In warehouses, it is important to not only use the number of square feet, but also the number of cubic feet as efficiently as possible. Activities such as order picking are increasingly conducted on different floors, which are connected through a transport system. This system must not only be able to transport products several feet up, but also back down again at a rate that varies considerably throughout the day. Additionally, distribution centers are making use of fully automated storage and order picking systems with all the characteristics of a production line.

Whether at a production line or in a warehouse, in both situations there is the need for an automated vertical transport system that can be fully integrated into a production line or logistics system. Selecting such a vertical conveyor is no simple task. There are many systems available on the market today which transports products up or down. Exactly how this is done however, varies greatly. This information will tell you more about the differences between vertical transport systems. Please see the bottom of this page to download the whitepaper.

"Which vertical transport system is best suited in a company will depend entirely on the situation. After all, production and logistics processes are different in every company. The way products are supplied and removed again is one of the things that is important. At which speed and frequency are products supplied? Is the starting point and end-point of the vertical transport system always the same or are there - depending on the product(s) - different infeed and/or outfeed levels? Do the products need to be transported up or down or actually move in both directions? And, quite important, how much space do we actually have for the system? Broadly speaking, there are five aspects that must be addressed in each selection process"

2. Infeed and outfeed directions
In the simplest situation the product will continue in the same direction after bridging a difference in height. However, there are situations where it is desirable for a product to be directed to a different or even opposite direction. Many vertical transport systems make it possible to combine change in outfeed direction with bridging differences in height. There are even systems where product orientation can be changed. This increases the number of logistics solutions and prevents the need to install a bend in the belt conveyor or roller conveyor immediately after the system. However, the number of possible infeed and outfeed directions varies per vertical transport system.

3. Infeed and outfeed heights
In some situations it is desirable to be able to pick up products from different heights and deposit them at variousoutfeed heights. This is frequently the case in warehouses, which often contain several mezzanines and where products must be circulated between all of these floors. Not all vertical transport systems can serve multiple infeed and/or outfeed heights.

5. Capacity
The capacity of a vertical conveyor depends in part on the speed. The faster a vertical transport system, the more products it can handle per hour. Another factor is the number of products that can be processed simultaneously. The minimum capacity required in any situation is almost always determined by the structure of the overall process. The vertical transport system should not be the bottleneck here. The vertical transport systems available on the market today can vary considerably in terms of the above aspects. Some vertical conveyors are simply faster, more compact and versatile than others. It goes without saying that the various systems come at different prices. The goal is to select the system that best fits your situation in terms of price and performance.

There are actually only two basic techniques for transporting products up or down. The first basic technique makes use of conveyor belts and the second of an an elevator system. Every vertical transport system on the market today makes use of one of these two basic techniques. If conveyor belts are used it is not necessary to integrate a start/stop function into the system. After all, products go straight from the feed belt to the conveyor belt, after which they are finally sent to the discharge belt. In an elevator system the rate of supply of products must always be controlled. Elevator systems do however travel the shortest vertical distance, meaning their use of space is minimal.

"Prorunner mk1: vertical conveyor with a mature design The Prorunner mk1 from Qimarox is a vertical conveyor that has been steadily developed in recent years. As a result, a product lift was created with a mature design where efficiency and effectiveness are paramount. This results not only in minimal use of materials and thus a low cost, but also in a long lifespan requiring only minimal maintenance. And of course the lift does what it was designed to do: transport products up and down, both quickly and easily. The Prorunner mk1 consists of a compact and sturdy steel frame that provides stability under all operating conditions. The product carrier is suspended from a hoisting belt, which, unlike a chaindriven system, does not require tension and lubrication. The hoisting belt is furthermore virtually silent. The design of the Prorunner mk1 is modular. This means that the product can easily be integrated into any production line. For example, the Prorunner mk1 comes fitted standard with a roller conveyor or a belt conveyor, but in principle any other product carrier can be built in without having to modify the construction."

3. Mat-top conveyor
The main difference between a vertical conveyor and a mat-top conveyor is the direction of movement of the product carrier. With a vertical conveyor the product carrier goes up and down, whereas with a continuous product lift such as the mattop conveyor the product carrier describes a loop. Once a product is transported to another level, the product carrier returns via a different route to the starting position. This makes it possible to install multiple product carriers and therefore transport multiple products per cycle. The capacity of a continuous product lift is therefore much greater than that of a vertical conveyor. As the name suggests, the product carrier of the mat-top conveyor consists of a flexible, pliable mat. The mat is hoisted up using four chains or hoisting belts. Once the product reaches the right height and is deposited on a belt conveyor or roller conveyor, the mat makes its way back down via the underside. Most mattop conveyors are really only suitable for situations with a fixed infeed and outfeed height. Combining ascending and descending movements in a single mat-top conveyor is difficult. Moreover, as with a vertical conveyor, the number of possible infeed and outfeed configurations is limited. Products can only be fed in or out in the same or opposite direction. An additional drawback is that not only the rate of supply of products needs to be controlled but the feed belt and lift must also be precisely synchronized. If the mat is a little too early or too late then the product will fall into the lift with all the associated problems. In the event of a default the chance of product damage or product contamination is already high, because the product is always located inside the lift while it is being transported up or down. The advantage of the mat-top conveyor is its limited use of space. Furthermore, the necessary shielding can also be integrated into the lift. It is also relatively easy to transport longer or heavier products. The process here is no different.